Despite the trumpet having been around (in its various forms and guises) for a few thousand years, it may surprise many people that the development and addition of valves (the buttons to change notes) to the instrument didn’t occur that long ago, with the early versions dating from approximately 1825.

A quick search on the internet will throw up many names of inventors, from all over Europe, who had a hand in developing various prototypes and patents. These included Blühmel, Stoezel, Wieprecht, Halary and Périnet, but the man who bided his time, watched what the opposition were doing and came in at the last minute and stole the plaudits appears to be Adolphe Sax. I’m sure that there are possibly other names that could be added to the controversy to confuse things further! 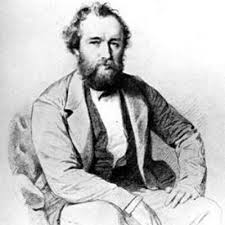 Regardless though of who actually should be credited with the honour of inventing the valve as we know it today, one thing is certain and it is  that the addition of piston valves to brass instruments –in particular the cornet and trumpet – allowed the instrument to increase the extremely limited range of notes it could play.

Prior to the advent of valves, when performing the music of Purcell, Handel and Bach, certain adaptations were made to the Natural or Baroque Trumpet to enable modifications to keys and pitch, such as the addition of crooks – which were additional lengths of tubing to change the pitch or Harmonic Series (see below) available to the player – or the addition of holes (similar to a recorder) in order to improve intonation and make certain notes more “listener friendly”. There was still however a massive gap in the range of notes that the instrument could deliver.

The next major development was supposedly from Viennese court trumpeter, Anton Weidinger who is reputed to have invented the keyed trumpet in 1770. This instrument was the catalyst for Joseph Haydn writing his much-loved Trumpet Concerto in Eb Major for Weidinger in 1796 and revolutionised what the Trumpet was capable of performing. The instrument however was to have a short lifespan, as due to its design flaws the tonal quality was deemed too unsatisfactory.

Up until the invention of keyed or valved trumpets, the trumpet was simply one length of tubing, wrapped around in a variety of ways, in order to make it easier to carry. The best and most familiar variety being the Military Bugle, thus explaining the limited number of notes available to the player and why Bugle calls sound so similar in musical terms.

Playing the Bugle would be the equivalent of playing the modern-day trumpet with no valves pressed down (open valves), and a relatively experienced player would expect to be able to play a pattern of 5-7 notes (called the Harmonic Series) i.e. Bottom C, G, Upper C, E, G, Bb and High (Double C) as shown below. 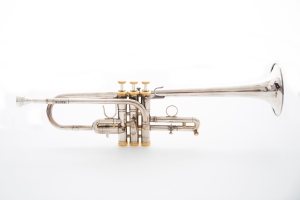 The method of securing these notes is a separate blog in itself, but for now we’ll keep it simple and say that as the notes get higher, the player adjusts the air velocity by buzzing their lips faster.

So back to the trumpet and the use of valves. When pressing the 2nd valve down, the air is diverted through a small length of tubing attached to the side of the valve, making the initial note sound half a step (semi-tone) lower. Therefore, this creates a new pattern of notes (or Harmonic Series) and instead of Bottom C, G, Upper C as above, the new series of notes is: Low B, F# (F sharp), Upper B, D#, F#, A, High B.
The slide attached to the 1st valve is the one closest to the player’s mouth and is twice the length of the 2nd valve slide, so when pressing down the 1st valve, the notes descend by 2 semi-tones (a whole tone). This creates the following Harmonic Series of Bb (B flat), F, Bb, D, F, Ab and High Bb.

Still with me so far? Good!
The 3rd valve slide is the equivalent in length to both the 1st and 2nd slides combined, so now you’ve a Harmonic Series 3 semi-tones lower and the ability to mix and match i.e. any note played on 1st and 2nd valves can also be played on 3rd only, facilitating “cheats” in difficult passages of music or when trills (a form of ornamentation, moving from one note to another rapidly) is easier to play on a “false” fingering.
You can then take the combinations further, with 2nd and 3rd valves; 1st and 3rd valves and finally 1st, 2nd and 3rd.
As a result, your Harmonic Series now looks like this:

For those of you who are one step ahead and thinking of the 4-valve Piccolo Trumpet from a previous blog that I wrote Why are there 4 valves on certain trumpets?, the 4th valve is used to add further notes to the range of the instrument and it can also be used instead of 1st and 3rd for better tuning and intonation, plus using it in combination with other valves, again facilitates an easier life for the player in certain tricky passages of music.

I hope that this has demystified “the valve” a little and given you a better understanding of how any valved brass instrument works. Thanks once again for reading the Music for You blog and would love some feedback from you in the Comments Section, including any future topics you would like to read about.
For further information about Andrew Jones, please visit my web-site.