The various Regiments of the British Army have, since their inception, been steeped with customs and traditions, many of which are still observed and implemented to this day.

Often these “quirks” are unique to certain Regiments or even particular individuals within the Regiment. Take for instance the rule regarding the wearing of beards. The Pioneer Sergeant is one of the few positions within the British Army allowed to have a beard when on parade. Pioneer Sergeants have existed since the 1700s and the tradition began when every British infantry company had one ‘pioneer’ who would march in front of the regiment and that ruling still applies to this day. 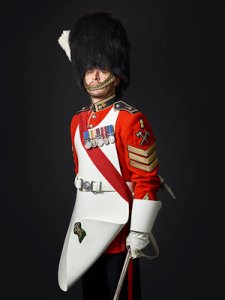 Variations which can also be found within Regiments are the rank titles used, or drill protocols, such as when to salute and how to address senior ranks. Nothing highlights this better than the following short film clip! I defy you not to at least smirk when watching this!

Another tradition for some Regiments is that at Mess Dinners those dining are not required to stand for the “Loyal Toast” as it is taken as read that their loyalty is never in question, therefore there is no requirement to demonstrate it.

For my own Regiment, The Royal Welsh, we too have many of these traditions. One particular quirk relating to our uniform relates to the five silk ribbons found attached to the collar on the back of the Ceremonial uniform called “The Flash” and is unique to the Regiment.
Harking back to the late 1700’s, the soldiers would have their hair tied into a pig-tail and then greased and powdered as opposed to washing it. This however would have marked their tunics, therefore their hair was tied up in a “queue bag” or “flash” so as to protect their uniform.

The Flash itself consisted of five overlapping black silk ribbons (seven inches long for soldiers and nine inches long for officers) on the back of the uniform jacket at neck level. In 1808, this practice was discontinued when the Army decided that hair for all soldiers be cut close to the neck.

The Officers of the Royal Welch Fusiliers however decided to retain the ribbons on their uniforms and continued wearing the Flash. In 1834 however, whilst inspecting the 23rd Foot, a less-than-impressed General  complained about the “superfluous” decoration on the collar of the coat and the matter was referred to none other than the King himself. The General’s main objection being that the Flash presented a potential target to the enemy. King William IV however took a difference stance to the General and was keen to approve its use, stating that no Welshman would turn his back on the enemy, therefore such a problem would never exist! Therefore the Flash was approved as “a peculiarity whereby to mark the dress of that distinguished Regiment”.

This was worn up until 1900, only by Officers, Warrant Officers and Colour Sergeants, but then was extended to all ranks of the Royal Welch Fusiliers when in full dress, and then in 1924 was further approved for wear on Ceremonial Parades and when walking out.

Many of you by now will be shouting out loudly at my lack of care and proof-reading in spelling Welch as I did, therefore cue the next explanation.

The use of Welsh and Welch has over the centuries been used side by side, either accidentally or deliberately and as a result, regiments maintained tradition and identity and dug their heels in by sticking resolutely to their preferred spelling. Following the Great War, two senior ranking Officers made an official application to the Army Board for official sanctioning of the spelling of “Welch”. This was granted by the War Office in 1920.

Since then and as various Regiments have amalgamated, the more conventional spelling “Welsh” has been adopted and the current Regiment (that has been in existence since 2006) is known as “The Royal Welsh”.

These are just a handful of the many traditions that make the British Army so unique and special and I hope that you’ve enjoyed reading about them, as much as I have researching them.

Thanks for reading the blog. For further information regarding the Regimental Band and Corps of Drums of The Royal Welsh please click on the link.